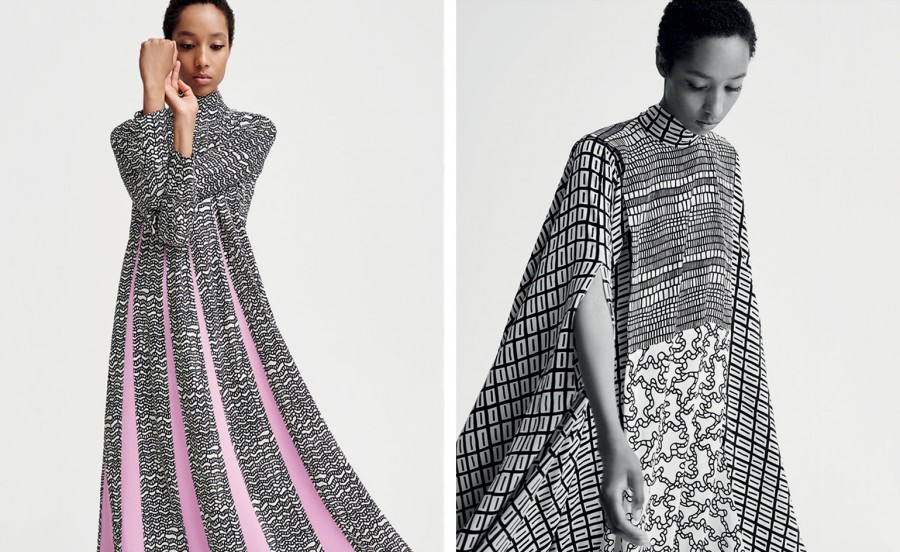 Two radically different reference points seem to anchor the A/W 2017 women’s Valentino collection; restrained Victoriana co-mingles with the bold, poppy post-modernism of the Memphis Group, the Milan-based design collective, founded in 1981, that included among its members Ettore Sottsass, Andrea Branzi and Matteo Thun. According to Valentino’s creative director Pierpaolo Piccioli, this was less a study in contrasts than an exploration of common themes.

‘Both periods are characterised by a shift towards technological progress and a general openness towards consumption,’ he says. The collection, he argues, integrates austere Victorian shapes with the saturated colours typical of Memphis, ‘establishing a new harmony between two distant yet analogue periods.’

It is not the first time Piccioli has spun his work around contrasting cultural references: his first solo effort (after Maria Grazia Chiuri’s departure from the label in 2016) was inspired by Hieronymus Bosch’s The Garden of Earthly Delights and featured a collaboration with Zandra Rhodes, while his latest menswear collection included slogans by English punk artist Jamie Reid. ‘Through being open to dialogue, the brand’s standards are always elevated,’ says Piccioli. ‘To me, Valentino has always been the expression of pure beauty, and I feel that connecting its patrimonial value to other forms of beauty is a natural process.’

For this latest work, Piccioli looked to two of the founding members of Memphis, French artist Nathalie Du Pasquier and British designer George Sowden, who collaborated with Piccioli, lending recent works which appear throughout the collection. Du Pasquier and Sowden are life partners who took different creative routes when Memphis disbanded in 1987. Du Pasquier took to painting full-time, producing abstract, geometric works that push the boundaries of spatial representation. Meanwhile, Sowden continued his work in industrial design, collaborating with brands such as Driade, Steelcase and Alessi, culminating in the launch of his namesake homewares brand in 2010. 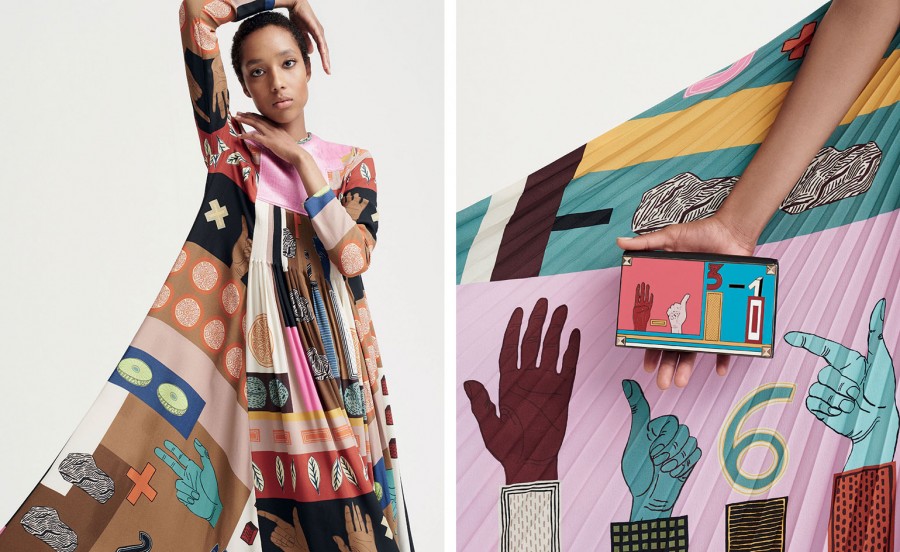 The works Piccioli chose for the Valentino collection come from two specific projects: a print series by Du Pasquier entitled Counting, and Sowden’s Designing without a Cause illustrations. Counting is a playful series of illustrated basic maths calculations performed by hands, numbers and mundane objects painted on colourful backgrounds. Designing without a Cause, on the other hand, is a collection of works Sowden has created over the past two years and further developed for an exhibition earlier this year entitled The Heart of the Matter. Piccioli focused exclusively on the black and white illustrations from this series, based on abstract patterns originally created to work as prints on textiles, decorations and details on manufactured objects, some dating back decades. The designs were taken apart by Sowden and used as raw material, uprooted and decontextualised. ‘[These works] allowed me to play with two aspects of the creative process I am most passionate about – chromatic experimentation and composition,’ adds Piccioli.

He built the collection around Victorian-inspired contemporary silhouettes, mixing colours and prints from the same era with the more modern works. ‘I played with different consistencies and heft, and adapted [Du Pasquier and Sowden’s] works to long dresses and coats so their personalities would be properly expressed,’ says Piccioli. Du Pasquier’s colourful prints are recreated in velvet, fur and leather, while Sowden’s designs are reproduced as an overall print on floaty silk dresses, combined with pastels, the austere silhouettes emboldened by swirly patterns. ‘The way Valentino developed the drawings was very clever and refined,’ says Sowden. ‘Mixing [them] with 19th century silhouettes was very postmodern,’ echoes Du Pasquier. ‘It is always interesting to have different worlds meeting: it’s where culture comes from.’

The works Piccioli has used make clear how far the pair has pushed on, post-Memphis. ‘I would never have done these drawings in the 1980s, but I am still the same person, and my taste for graphics is not radically different,’ says Du Pasquier. Piccioli admires how the pair’s visual languages originated in a collective but became personal and singular. ‘It’s a great challenge that both artists have done successfully,’ he adds.

The three creatives still see the strong influence of Memphis in contemporary culture; and not just as nostalgia but as a visual approach as valid and vital as ever. ‘Memphis was a defining moment of the late-20th century. It influenced the aesthetics and identity of global design,’ says Sowden. ‘As such,it will never go away, but will be forever discussed and criticised, added to, copied and constantly reinterpreted by generations to come.’ Piccioli agrees: ‘The Memphis Group is resurfacing as a revolutionary reaction to the standardisation of taste and attire. Its message is now more pertinent than ever. Its position of gentle disregard and defiance may be a lesson that we can make our own.’

As originally featured in the September 2017 issue of Wallpaper* (W*222)
Read more at https://www.wallpaper.com/fashion/valentino-nathalie-du-pasquier-george-sowden-graphic-collaboration#dcIjpJEkAmIwPVXu.99